Liam Forde: “Great to Be Here” Album Release in the Theater Join Liam Forde as he celebrates the release of his new album, “Great to Be Here”, at the Birdland Theater on June 13th at 8:30pm!

On June 13 at 8:30pm, Liam Forde will make his Birdland solo debut celebrating the release of his album, “Great to Be Here.” Called a “dreamy pop debut” by Huffpost, “Great to Be Here” features original songs that blend cosmopolitan pop and a vintage sound with contemporary influences like Jon Batiste, Lake Street Dive, and Rufus Wainwright. Forde’s authentic points of view create something fresh while drawing from a decidedly 1960s soundscape that encompasses the dry wit of Noel Coward, the infectious rhythms of Stevie Wonder, and the sweeping grandeur of classic Hollywood soundtracks. Liam will perform vocals, piano and flute, with Zack Eldridge on drums.

In addition to Forde’s original tunes, the evening will feature some of his favorite standards from the Great American Songbook and selections by Kay Thompson, Michel Legrand, and others. In The Wall Street Journal, Will Friedwald raved “the boy wonder never fails to find precisely the right note.” Peter Marks in The Washington Post praised Liam’s “breakout performance.” According to Nitelife Exchange, “Forde has taken the community by storm.” Forde has been the recipient of many honors, including the Bistro Award for “Performer on the Rise,” the Nightlife Award for “Outstanding Male Vocalist,” the Mabel Mercer Foundation’s Julie Wilson Award, and a Helen Hayes Award for “Outstanding Performance.” In addition to headlining shows in New York and London, he has performed concerts in Paris at L’Auguste Théâtre, Café Universel, and Le Carré Parisien. 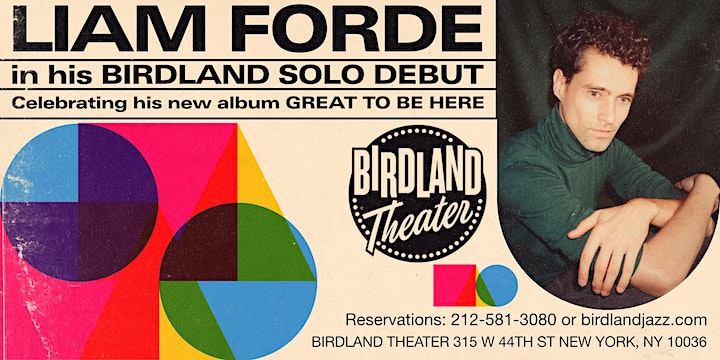